How did you begin/how long have you been doing scroll sawing?

I started scrolling in 1997.  It was by chance that I found even found a scroll saw.  My grandfather and I had went to Big Lots and they had one on close out.  It was a cheap saw, about $40.  Once I got home with it, I took it out and turned it on and I really enjoyed it.  That saw only last about a month before I got a “better” saw.  That was a craftsman brand.  I had recently built a building out of reclaimed wood and tin from a chicken house that had been blown down by a tornado.  I quickly turned that into my shop.  I have since bought many different brands of scroll saws with my favorite one being my current saw made by General Machinery called the Excalibur ex-21.

What is your favorite type of design to work on? (ornaments, pictures, frames…etc.)

It is hard for me to pick just one style that is favorite.  Recently I have been working with a lot of reclaimed wood.  I enjoy the freedom the reclaimed wood gives you.  The more you knock it around, the better it looks.  On the complete opposite side I really enjoy making detailed plaques, and ornaments.  Word art is also fun.  You have an endless supply of ideas that look great in wood. I rarely paint any of my projects.  I love using different hardwoods and letting the beauty of the wood show through the protective finish.  You would be surprised at all the colors of wood there is.  Another item that I really enjoy making now is cutting boards.  You can use all the natural colored wood and create some awesome designs with them.

At what point did you realize your art could be profitable as well?

When I first started making things, I gave a lot away as gifts to my family and bedroom walls were covered with all the pieces that I had created.  I was 16 when I did my first craft show in 2000.  I may had sold some pieces, before then, but when I did the first craft show it really shown me that people were interested in the work I had made.  I took a couple years off from shows, but now I am doing them again and people seem to enjoy seeing it.

Could you explain a little bit about your involvement with the scroll sawing magazine?

I think my first article published was in 2001 in Scrollsaw Woodworking and Crafts.  It was an eagle that I had designed and was cut out on the scroll saw.  Since then I have been published in Creative Woodworks and Crafts with my designs. I also still do work for Scrollsaw Woodworking and Crafts magazine.  Besides having my designs published, I also test cut patterns from other designers for them.  When I am test cutting a pattern, the editors send me the patterns and basic information about what woods they would like to be used for the project.  After I get the project finished, I package it up and mail it to their head quarters.  After they photograph the piece and the issue is out, they mail the piece back to me.

Would you consider scroll sawing to be particularly dangerous?

Scrollsawing has to be one of the least dangerous woodworking tools you can have.  I have nicked my finger, but it wasn’t bad.  You always need to show the tool respect and never get distracted.  I use a footswitch that allows me to keep my hands on the wood at all times.

What is the most interesting/bizarre piece you’ve ever done?

I recently was asked by Southern Accents to make a 12 feet tall by 8 feet cut out of Alabama.  Every one of the 67 counties were cut out separately.  It was all made of reclaimed wood.  That project took about 80 hours to complete.  It was the biggest and most interesting project I have made to date.  It was used as part of the back drop to the stage at the Southern Makers show held in Montgomery on May 2-3, 2015.  It can now be seen at Good People Brewing in Birmingham, Alabama. 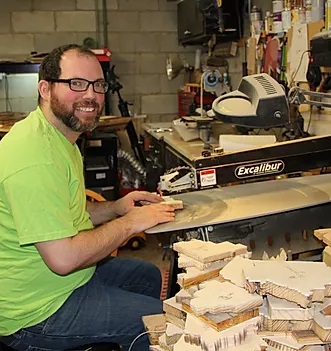 The Market at Pepper Place is open, and needs your support.

Our response to COVID-19 was to establish a drive-thru Saturday market plan to continue providing our communities with access to fresh, locally grown food and to continue supporting small Alabama farmers and local businesses.

As the pandemic lingers on, we need your support now more than ever. Please continue shopping the market, but also become a “Friend of The Market” to ensure The Market will be here for generations to come.